High res images of the surface of Pluto beamed from NASA’s New Horizons spacecraft reveal unparalleled geographical variety from soaring mountains to sand dunes to frozen ice floes. Alan Stern said, “Pluto’s showing us a diversity of land-forms and complexity of processes that rival anything we have seen in the solar system.” 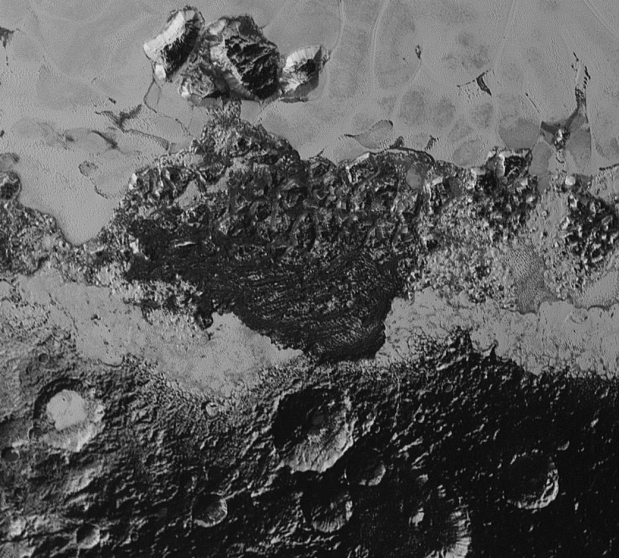 An atmospheric haze of Pluto has a more densely layered structure than had previously been expected, so much so that the gas exactly illuminates the dark side of the dwarf planet. Members of the New Horizons science team believe that this effect may even have delivered unexpected imaging opportunities for the probe.

Furthermore, as on Mars, the image present evidence of valley networks seemingly carved by an unknown flowing material. The dwarf planet is at least as geologically diverse as Mars, and the discoveries made by New Horizons are not limited to the planet’s surface.

The picture downloaded this past week have more than doubled the amount of Pluto’s surface seen, at res of about 400 meters 440 yards/pixel. NASA said New Horizons will continue to send data back to Earth until late next year.

He said, “if an artist had painted this Pluto before our flyby, I probably would have called it over the top, but that is what is exactly there.”. Long considered the farthest planet from the Sun before it was reclassified as a dwarf planet in 2006, Pluto has never before been explored.

In July, New Horizons a nuclear powered spacecraft about the size of a baby grand piano became the first spaceship to pass by Pluto. By doing so, the unmanned probe has for the first time given scientists the chance to obtain close-up image from the distant and complex dwarf planet.