Earlier this year, the MSI introduced its Aegis line of barebones systems and Now, it has upped the ante again with the Aegis Ti, that features upgrades like a custom Intel Z170 motherboard, support for two-way NVIDIA SLI, an 850 watt Platinum PSU and liquid cooling for the CPU.

It has a higher memory capacity than its predecessors, with support for up to 64 gigabyte (4 x 16 gigabyte) of SO-DIMM DDR4 (the other Aegis models have only two SO-DIMMs) and the new Silent Storm Cooling 3 thermal solution. Furthermore, the two M.2 sockets allow you to install two NVMe drives in RAID 0, and you can add one more 2.5-inch drive or two more 3.5-inch ones if you require more storage. 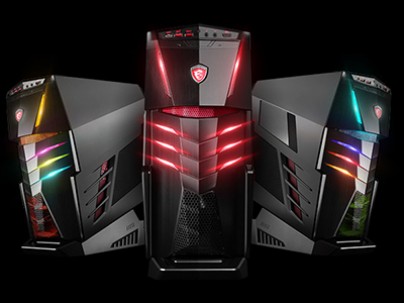 The motherboard’s rear I/O panel has 4 USB 3.1 Type-A (Gen 1) ports, 4 USB 2.0 ports, audio jacks and a P/S 2 port. The front panel’s HDMI pass through is on back of the chassis in a space between where the graphics cards would go, making it easy to connect it to the GPUs. Internet connectivity is also provided by a Killer LAN E2400 RJ45 gigabit Ethernet port and an onboard Killer Wi-Fi 1435AC adapter.

The new MSI Aegis Ti barebones PC appears to be the king of the Aegis mountain, and it’ll arrive in mid-August starting at $649.99.