Self-checkout kiosks are at a tipping point, many experts believe; while they have become increasingly common over the last several years, they are on the cusp of becoming ubiquitous. Many believe that in new retail outlets, especially supermarkets, kiosks will come standard, while older locations are steadily being retrofitted to accommodate this cost-saving technology. But cost savings aren’t the only benefits to self-checkout kiosks: 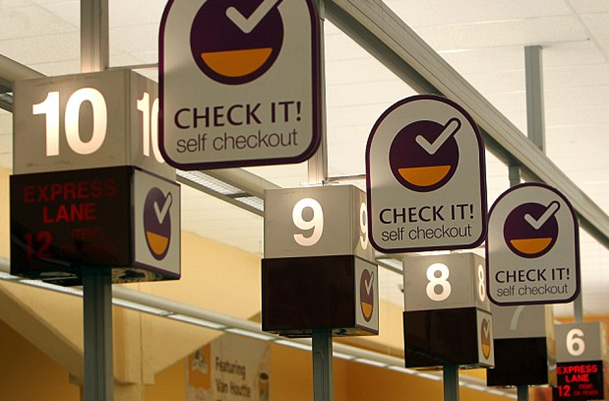 Consumer autonomy is the customer’s ability to review products freely, without perceived pressure from sales people. The self-checkout kiosk can offer promotions and upsells without seeming as though it’s applying sales tactics or pressure, as consumers have the space to rationally consider the purchase, making them feel in control of the transaction every step of the way.

In its report on self-checkout kiosks, the Harvard Business Review reported that orders made on Taco Bell’s digital app were 20 percent more expensive than orders made to a human cashier. McDonald’s has also found that customers are more like to “super-size” their meals, a bump of 30 percent to the price tag. One theory goes that customers are less worried about being judged by employees when they order from a self-serve kiosk than a human cashier, which could give self-checkouts a new appeal in a variety of industries. A research group from the Rotman School of Management (University of Toronto), Duke, and the National University of Singapore found that at one liquor store, sales of a hard-to-pronounce products increased by 8 percent when they switched to self-service. Social friction is a major motivator of consumer behavior in-store and reducing that friction leads directly to increased sales.

You can see it at any supermarket that’s introduced self-checkouts; while long-lines build up behind human cashiers, the lower cost to operate self-checkout kiosks mean that there are more of them and there’s usually one open. They typically draw shoppers in or near the “express” category, with fewer items, and satisfying customers who shop in bulk remains a hurdle.

Touchscreens are a key technology in self-checkout kiosks and they need to be built to last reliably, as they’re used hundreds of times a day. A well-regarded touchscreen supplier for retail kiosk manufacturers, A D Metro builds both ULTRA Resistive and projected capacitive touchscreens. Here’s the difference:

ULTRA Resistive touchscreens are made for outdoor use; they’re vandal-proof, water-proof, weather-proof, and ideal for environments where they won’t be monitored and will be exposed to the elements. They rely on contact between two layers of glass, so they’re not suitable for multi-touch use, such as dragging or pinching.

Projected capacitive touchscreens from A D Metro use a common controller for multiple sensor formats and sizes, saving engineering costs and accelerating development times. These generally have better optics and are multi-touch compatible; while the right supplier can provide durability, they are not as tough as resistive options.

For more information on the type of screen that works for kiosks and their environments, visit Admetro.com.

Like any technology, there are downsides to self-checkout kiosks as well – the HBR report cited above also found that it made customers more impatient. Part of the reason was that kiosks “obscure the work” that’s being done for the customer, something that customers appreciate and that makes them more inclined to wait. There’s also the human interaction factor; sometimes, it’s the personal experience that creates a brand relationship. Clothing companies in particular are using self-checkout not to replace human sales representatives, but to put them on the floor instead of behind the counter.