The Prius is one of the most important automobiles in history. That makes the release of the all-new 2016 model A Very Big Deal. Not only is the 2016 Prius all-new from the ground up, the new car is the first Toyota built on the company’s much ballyhooed, lighter weight TNGA global architecture. 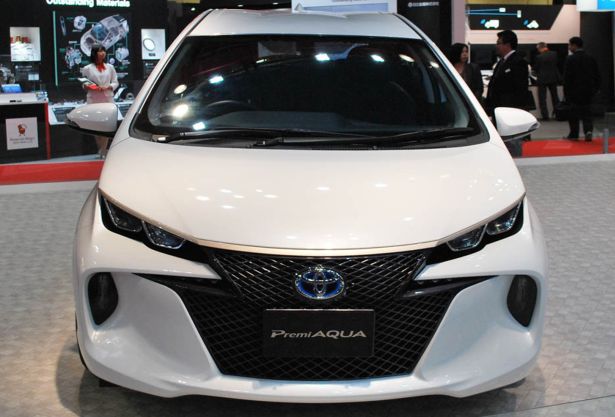 It is defined by sliver like grilles and boomerang-shaped LED headlamps, with vertical fog lights dripping from their outer edges. Hood creases trail back from the badge, which Toyota proudly points out is positioned at the same low height as the Scion badge on the FR-S sports car.

Interestingly, the vertical section of the rear window is tucked in quite far below the spoiler. Closer to the ground is a diffuser that may or may not help fuel economy but does serve to visually break up the bluff rear end. Clearly, the styling evokes the futuristic hot mess that is the hydrogen-powered Mirai, even though it isn’t nearly as hideous.

Toyota also declined to talk about the thing that gives the Prius its raison d’être, its hybrid powertrains.The center stack and air vents are now housed in a tall tab that rises from the dashboard like Darth Vader’s tombstone.

The gear selector’s been moved from its current position next to the center-stack controls to a housing below them. The roof peak has been moved forward, and the roof itself appears flatter before arcing down into the rear window.

Cleverly, partially blacked-out C-pillar treatment similar to that of the Jaguar XJ exaggerates the roof break at the top of the rear window, and it helps to lengthen and lighten the car’s visuals while contributing to a look that is more sedan-like than before.

The Prius will have more power up to 150 horsepower and will continue to offer a 4 cylinder engine/CVT combo as its primary source of propulsion, with the nickel metal hydride base and lithium-ion upgrade battery packs providing energy storage.