The Infiniti QX60 is the brand’s most popular model. The three-row SUV is a favorite family hauler thanks to its good-looking design and spacious interior. 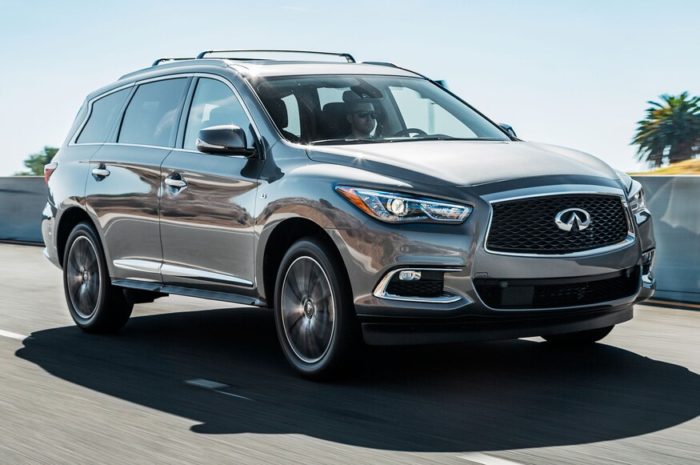 The current generation has been on the streets for almost eight years, and although its design looks fresh, its interior and platform are getting old. The automaker is already working at full scale for the next generation, which should be shown within the next two years. During Infiniti’s 30th anniversary celebration at Spaceport America, we got a chance to take a peek at the next QX60. We only saw it on a quick animated video, but we at least got a sense of what to expect for the three-row SUV’s next generation.

The front of the new QX60 will sport an updated grille that’s very similar to the Monograph Concept’s. The grille is more square than the current QX60 grille, giving the crossover a bolder and wider look. With slimmer headlights and a fascia that incorporates what look like fake air vents on the sides, the QX60 has a more masculine look than the current model.

Adding to that modern personality, an optional two-tone roof brings a different touch to a family SUV. Personally, I liked the two models we saw on the animated rendering video, and the two-tone roof adds a stylish, younger vibe to it. The slim taillights looked like they were taken out of the QX Inspiration, the concept that Infiniti plans to bring in the future.

We all know the future is electric, and Infiniti is following that trend. The automaker is developing one EV platform that will support two different powertrains: a fully electric plug-in powertrain and a gas-generated EV powertrain. The former is a traditional EV; the latter will use a three-cylinder VC-Turbo gasoline engine that will feed energy just to the battery.

The AWD platform will accommodate two electric motors (one for each axle), and the battery pack will reside in the middle. According to Infiniti, the gas-generated EV models will feature a significantly smaller battery pack along with a fuel tank and an exhaust system connected to the engine.

The slim headlights and taillights and the grilleless front will carry through. (The Qs Inspiration is the only one of the three that will sport a grille.) Expect more down-to-earth details, such as regular doors and side mirrors instead of cameras. Inside, Infiniti promises a “loungelike cabin,” similar to the interiors of these concepts.