The Department for Transport (DfT) is implementing new vehicle technology to strengthen the fight against drivers using their mobile phones while behind the wheel.

According to the plans, software could soon be built into vehicles which would work to disable any mobile function that requires internet access or connection to a telephone network. This means that a phone signal would be blocked, making it impossible for motorists to text, call or send emails while they are driving. 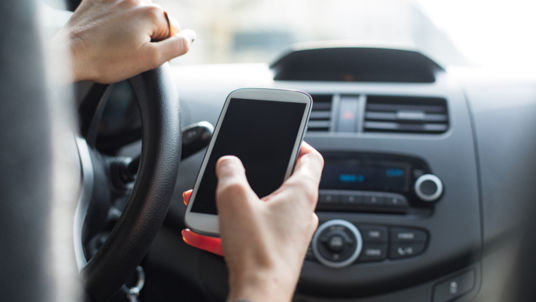 A spokesman at DfT commented: “We are determined to crack down on mobile phone use at the wheel…We will continue to explore what more can be done to tackle this crime.”

Ministers are set to discuss the new vehicle technology plan with both car manufacturers and mobile companies in the New Year.

Using mobile phones while driving has been a particularly hot topic recently, with specialist Volkswagen dealer Inchcape Volkswagen on hand to analyse what’s been making headlines:

The law behind using mobile phones while driving

As per guidelines set out by GOV.UK, it is illegal for anyone in the UK to use a handheld phone or a similar device whenever they are driving or riding a motorcycle. This is even the case when a motorist has stopped at traffic lights or is queuing in traffic. It refers to making a call or sending a text message, as well as using a mobile phone in order to read a text message, check a social media account or follow a map.

The only exceptions to the rule are as follows:

Fail to follow this law and you are at risk of receiving a £100 fine and adding three penalty points to your licence. If the case is so serious that it is sent to court then you could end up with a maximum fine of £1,000 and face being disqualified from driving or riding.

Expect to see even stricter laws as early as 2017, as the government has drawn up new rules whereby drivers will receive six points on their licence and a £200 fine if they are caught using their mobile phones while behind the wheel. More experienced drivers could also be taken to court if they offend twice, facing fines of up to £1,000 and a minimum six-month driving ban as a consequence.

In a BBC News report on the topic, transport correspondent Richard Westcott acknowledged: “It has been illegal for years but it is still common to see a driver using a handheld mobile at the wheel. So the government is trying to send out a message, to make illegal phone use as socially unacceptable as drink-driving or not wearing a seat belt.”

Despite the prospect of drivers across the UK being faced with stricter laws when it comes to using a mobile phone while behind the wheel, many still choose to flout the rules.

According to the results of a survey carried out for the RAC Report on Motoring 2016, 31 per cent of motorists admitted to using a handheld mobile phone in order to make or receive a call while they were driving in the last 12 months.

Attitudes to driving and using a mobile phone are also worrying. According to the same RAC study, 14 per cent felt it was acceptable to take a quick call from a handheld phone while behind the wheel, while 20 per cent believed it was safe to check their social media accounts when in stationary traffic.

RAC road safety spokesperson Pete Williams stated: “There is clear evidence that the illegal use of handheld phones by drivers to talk, text, tweet, post, browse and even video call is, if anything, on the increase…The fact that drivers have little or no confidence that they will be caught when breaking these laws is a likely contributor to the problem and it is sadly the case that every day most road users see other drivers brazenly using their handheld phones when in control of a vehicle – a sight which should be a thing of the past.”

What about using hands-free phones while driving?

Although not against the law currently, psychologists at the University of Sussex have also called for drivers to not use hands-free phones while behind the wheel. This is after research by the group concluded that these devices can be just as distracting as their handheld alternatives.

Dr Graham Hole, a senior lecturer in psychology at the University of Sussex, noted: “Hands-free can be equally distracting because conversations cause the driver to visually imagine what they’re talking about. This visual imagery competes for processing resources with what the driver sees in front of them on the road.”

Drivers should be aware that while there is no law against using a hands-free phone while driving, motorists can still get prosecuted should they be found not to be in proper control of their vehicle — regardless of the technology being used at the time of the incident.