Rail-Gun of electromagnetic which is now announced by U.S (O.N.R) office naval research. A prototype program was started in 2005 and demonstrated proof-of-concept at 32 mega-joules of energy. Phase II, which began in 2012, has been focused on rep-rate fire capability and thermal management techniques required for sustained use. 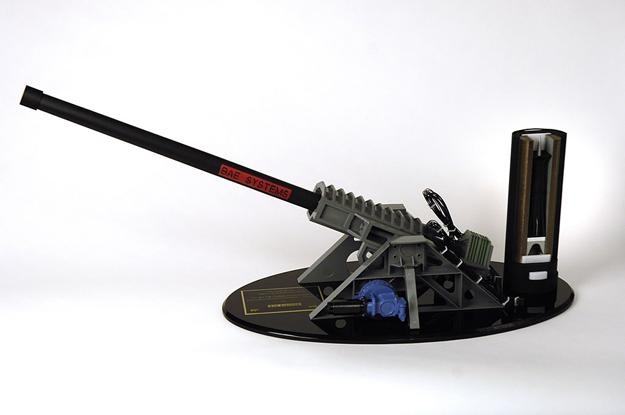 This program continues to make progress and is now scheduled for at-sea testing aboard a Joint High Speed Vessel – USNS Millinocket – in 2016. When perfected, it is hoped that the final version of the rail-gun will achieve 64 mega-joules of energy, with an even longer range. The EM (electromagnetic) Rail-gun is a long-range weapon that fires projectiles using electricity instead of chemical propellants. Magnetic fields created by high electrical currents accelerate a sliding metal conductor, or armature, between two rails to launch projectiles at 4,500 mph – nearly six times the speed of sound. Unlike traditional artillery that destroy targets using explosive materials, the rail-gun inflicts damage by the extreme speed of impact. The kinetic energy of the warhead also eliminates the hazards of storing high explosives in the ship and leaving unexploded ordnance on the battlefield. Its pinpoint accuracy and phenomenal range (over 100 miles) will be a “game-changing and disruptive technology” according to the U.S. Navy. Each 18-inch projectile will cost about $25,000, compared to $500,000 to $1.5 million for conventional missiles.

The Electromagnetic Rail-gun brings significant technological advances to our Sailors and Marines,” says Roger Ellis, program manager at O.N.R. “As the system moves forward along its planned schedule from the laboratory launcher, we’ve achieved breakthroughs in compact power and gun design, and will test the next phase of prototype at both sea- and land-based sites in 2016 and 2017.

Experts from the O.N.R, Naval Sea Systems Command and BAE Systems will showcase the rail-gun to the public, for the first time at the Naval Future Force S&T EXPO, the Navy’s premier event to share information, discuss research opportunities and build science and technology partnerships between the Navy and Marine Corps, industry and academia.