Motorola has launched a contest around the globe to jump-start Linc Moto Mod development, though so far results have been somewhat limited. The latest Moto Mod to surface on Indiegog is Linc – a smart walkie talkie attachment that will allow the users to stay connected with your loved ones in that areas where cell phone service are not available. You can talk to anyone to whom you want even at a range of up to six miles without cell service. 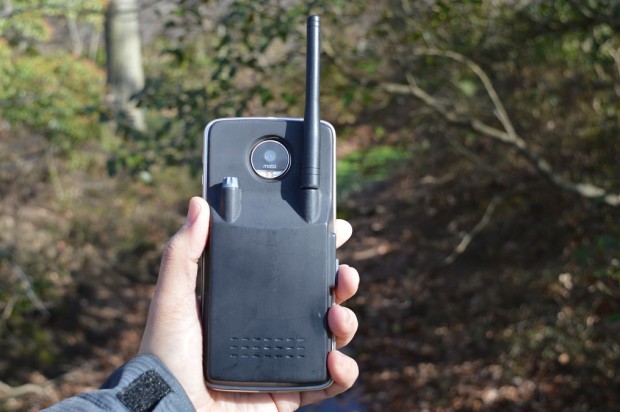 The Linc Moto Mod supports 22 channels and features SMS, GPs location sharing, and an emergency alert button that will send out an SOS signal and you should be distressed. The walkie-talkie phone also capable of communicating with two-way radios by way of its radio-over-IP gateway. The Mod can also send SMS or transmit voice to a single buddy on a ski lift, or to a group of friends waiting for you at the hotel bar. The user can even send out their GPS location from their smartphone without any cell service.

The impressive thing is that, the Moto Mode is water and dust resistant and act as a NOAA weather radio and emergency beacon. The Linc Mod has its own 1,500mAh battery that lasts up to the longer usage of 20 hours of standby time, and the device can even communicate with other conventional two-way radios.

Basically, it is designed to work with the Moto Z, Linc said that the Walkie-talkie can connect and work with any Bluetooth enabled device. Also said that this is a crowdfunded device. The company has never shipped a product, there is always a chance that the device may never ship or work like you expect it to. But if you are so inclined, you can order a Linc Moto Mod. The device costs for $99 and you can pre-order on Indiegogo.