Philips Sonicare launched a new smart toothbrush that connects to an app via Bluetooth. The new toothbrush, which goes by the unnecessarily long name the Philips Sonicare FlexCare Platinum Connected, combines a variety of sensors in the handle to track in the real time how you are brushing your teeth.

The brush itself is about what you would expect from an smart electric toothbrush. The brush head is, according to Philips, ‘the only power toothbrush head with flexible rubberized sides and bristles which uniquely conform to the shape of teeth and gums’. 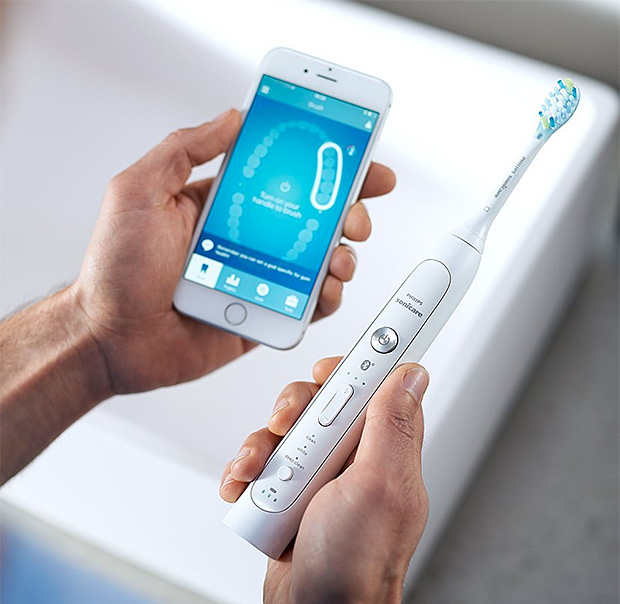 The rest of the brush is a little more complicated. A Power button sits near the middle, while a series of Bluetooth LED indicators are located below. Below those is a rubbery rocker for the vibration intensity—press the Plus icon for a stronger shake and the Minus icon for a lesser flutter; there are 3 levels of intensity.

The data is synced via Bluetooth to an app for both iOS and Android devices. The way it works is pretty straightforward: as you brush, a 3D map of your mouth shows you which teeth you’re brushing and tells you if you are brushing too much or too little. The app also warns you if you are using too much pressure or scrubbing too hard. When the 2 min of brushing are up (both the brush and the app have a timer), you can see if you missed any spots.

The connected toothbrush is already launched in July and the Philips Sonicare app is available in the Google Play store and also Apple App store. The battery lasts up to two weeks between charges. And the toothbrush memorizes up to 14 brushing sessions, so if you don’t sync it for about two weeks, the data won’t be lost.