Virtually all modern businesses in 2014 have at least one computer system that they use. Quite often, businesses will have a number of computers being used by employees, whether they are based on the shop floor, in the office or in a factory.

Computers undoubtedly help us to be more efficient and productive in our daily working lives, and without them, life would be so much slower than it is today!

It’s an accepted practice that we are able to gain access to all sorts of information stored on a computer at a moment’s notice, but what happens if you have a number of computers at your location that have no way of ‘talking’ to each other? Well, it’s quite simple, you just network them.

But what happens if you need to gain access to some data and it’s stored in a computer on the other side of the office that you cannot get to (for example, your boss has some important project files stored on their computer, and it’s in a locked office)?

In order to solve such a conundrum, what many business owners tend to do is set up what’s known as a file server (often shortened to just “server”). If you have heard of servers before, but you aren’t too sure what they are or how they operate, this handy guide will tell you all you need to know on the subject!

What is a server?

A server is basically a powerful type of computer that has been designed to provide software and data to any networked computers. Servers can look just like normal desktop computers, with some larger ones basically sitting inside a cabinet that can be wheeled around on castors.

You can run servers by themselves, or you can run clusters of servers for settings where vast amounts of storage space or processing power are need. Clustered servers are typically fitted in a rack, as they provide the best use of space and can be easily removed.

Servers typically offer a plethora of remote management tools. Instead of having to physically walk up to the server and use it in order to monitor or diagnose anything, you can simply log into it from a remote location, such as your own computer on the network, or even an Internet-connected computer from the other side of the world! This is useful when you need to perform routine maintenance, such as administering users, changing passwords and so on.

Do I need a server?

If one or more of the following points applies to you, then you definitely need to have a server on your premises: 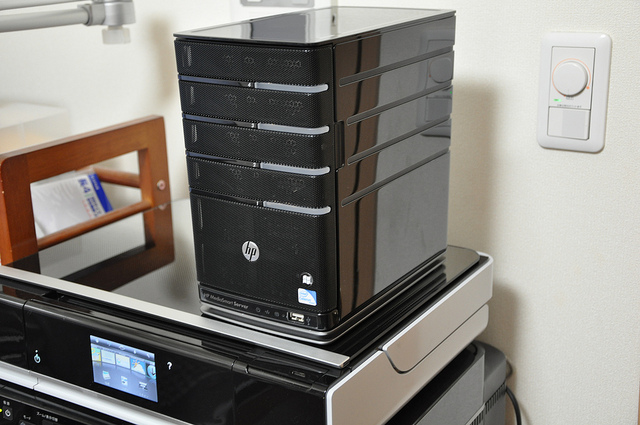 What type of server do I need?

As I mentioned a little earlier, there are a few different types of server available that you can buy, depending on your specific requirements. A tower server, like the one pictured above, looks pretty much like a desktop computer, and is often used by small businesses or small offices that don’t have huge storage requirements.

Rack servers are more suited to those that require a cluster of servers in simultaneous operation, and are useful because they can be stacked up in racks, making such a setup the most-efficient use of space. Racks come in a range of industry-standard sizes, and there are many manufacturers of rack-mountable servers such as HP (check out the different types of HP servers here).

If space is at a premium and you want to run one or more clusters of servers at your premises, you should instead opt for blade servers. Blades are similar to rack servers, except that they are extremely thin in design and represent excellent value-for-money when you consider how much you save on electricity, parts and human resource costs.

What about a DIY server?

Any of the above servers are produced by a number of different computer manufacturers, but some people tend to build their own servers and configure them using open-source (i.e. free) software in a bid to cut down on cost.

Although this might be fine if we are talking about building a low-budget PC, I would not recommend this setup for servers. The reasons why are as follows: