Scientists have been trying to unravel the mysteries of dark matter for years. We know it’s there, based on its gravitational pull on visible matter; it seems to have dictated thedistribution of galaxies. But we can’t detect it ourselves, because it doesn’t emit radiation, or at least the type we’re familiar with. The 17-mile-long Large Hadron Collider (LHC) will soon power up by the end of this month to test a new theory: whether dark matter originates from the Higgs Boson. 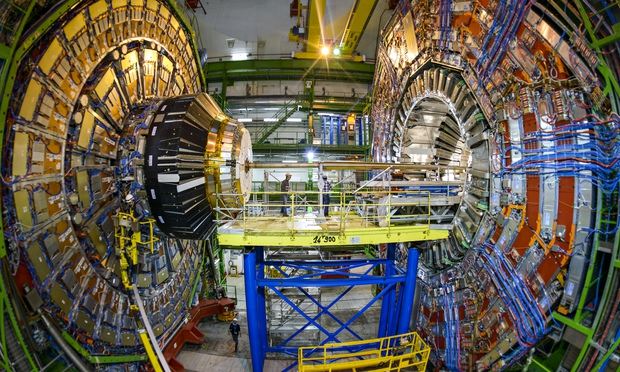 The LHC had been powered down since 2012, and has since received $163 million worth of upgrades, according to Scientific American. Those upgrades, including reinforcing the connections between the superconducting magnets around the collider, should enable the LHC to smash particles together at incredible speeds and energy levels never seen before on this planet — up to 13 trillion electron volts (TeV), which is almost twice the level the collider achieved in the past. The higher energy levels will let physicists search for new particles and run tests they couldn’t run before.

All of this could lead to new discoveries. As many science enthusiasts remember, back in 2012, CERN announced the LHC had revealed a particle that was probably the Higgs Boson, which was long predicted by the Standard Model of particle physics. Researchers later confirmed the existence of the Higgs Boson in 2014.

Unfortunately, while celebrated, the discovery it didn’t lead scientists down more exciting paths, such as discovering the true nature of dark matter and dark energy — orsupersymmetry, which poses that every particle has a “superpartner” that’s much heavier, and could account for the unexplained dark matter in the universe in a way that the Standard Model can’t.

Christoffer Peterson, a research scientist at Chalmers University of Technology in Sweden, plans to test a new particle model based on supersymmetry with the LHC. Among other things, his model predicts the Higgs particle can disintegrate into a photon and particles of dark matter. Researchers at CERN are willing to test his model with the LHC, similar to how they have already confirmed a Higgs particle can disintegrate into four muons (pictured above right). Soon we should find out if Peterson’s team has the answer — if so, it will have wide-reaching implications for what we know about how our universe formed, and the shortcomings of the existing Standard Model of physics, which dates to the 1970s.

Back in November, scientists using the much smaller Large Hadron Collider beauty detector (LHCb) confirmed two new subatomic particles that physicists had previously predicted to exist. In the main LHC, particles will begin circulating around the collider in a few weeks, after testing is complete, while the first collisions will begin to take place in May. And in case none of this is enough particle-smashing power for you, scientists are also already working on a successor to the LHC that’s going to be 60 miles long and can test at energy levels approaching 100 TeV.