The 2017 Honda CR-V goes on sale in December 2016. It is predecessor, the fourth-generation 2016 Honda CR-V, is on track to sell about 380,000 crossover SUVs in 2016. It is the highest volume crossover SUV and one of the top selling vehicles in the market.

The 2017 CR-V is a fresh-sheet design that shares platform architecture with the award-winning Honda Civic. Honda knows that the each previous CR-V model has been a hit. So instead of reinventing the wheel (and potentially alienating loyal customers) it chose to tweak, refine and polish what was right with the last year’s model and apply each of those improvements to the new one. That said, the new model is roomier, safer, more powerful and more luxurious than the model it replaces — it has gone upscale. 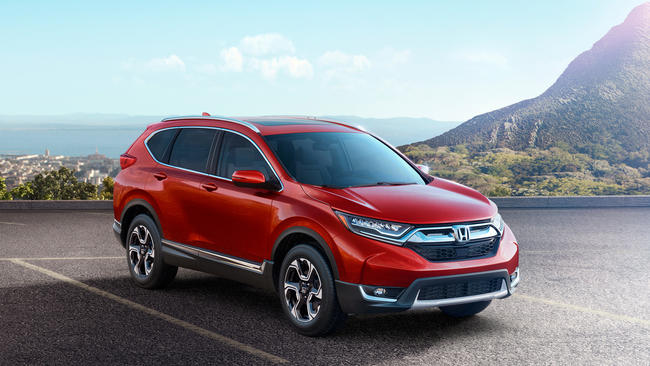 Honda is offering CR-V buyers a choice between its traditional 2.4-liter 4-cylinder, which is naturally aspirated or a new 1.5-liter 4-cylinder with a turbocharger. The 2.4-liter is rated at 184 hp and 180 lb.-ft. of torque. Compared to 190 hp and 179 lb.-ft. of torque from the new turbocharged engine. While the numbers appear nearly identical on the paper, a turbocharged engine delivers its axle-twisting torque right off the line, and this translates to a lighter and peppier feel from behind the wheel.

Both engines are mated to a continuously variable transmission, which sends power to the front wheels. All-wheel drive, in the form of Honda’s Real Time AWD System, is also available. The engineers have improved it for the 2017 with a new electronic control module that sends 57 percent more torque to the rear wheels for better four-season traction.

Pricing on this Honda 2017 CR-V car hasn’t been disclosed so far. It has been confirmed to be launched for official sale in December this year. We believe you will need to pay start from $24,645 to get 2017 Honda CR-V.